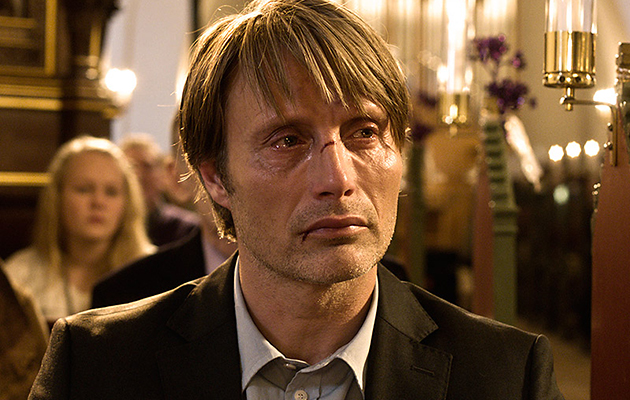 Must-See Movies Beyond the Blockbusters

A kindergartner kisses her teacher on the lips in the school playroom. Taken aback by the unexpected intimacy, the teacher nonetheless sets her straight: little girls do not kiss grown men on the lips. Then a little boy interrupts to initiate a pillow fight. Ashamed, confused, rejected, the little girl disappears: a woman scorned.

In Thomas Vinterberg’s devastating Danish drama that little pebble tossed in a pond creates big ripples for the small community in which little Klara (Annika Wedderkopp) and her teacher Lucas (Mads Mikkelsen) live. For Lucas, this brief moment that reflects the passionate love little girls sometimes harbor for mature men changes his life and his relationship to his tight-knit hamlet forever.

When the news flows from the child to the headmistress to the parents to the parents of all the children, social services gets involved and interrogates Klara. She knew how to kiss a man, but not how to answer adult questions about an act she can’t articulate. In this process of trying to codify behavior that isn’t cut-and-dry, the movie’s key theme is revealed: how civilized society has a hard time reconciling acts that unfurl in shades of gray.

With unwavering conviction, Mikkelsen (NBC’s “Hannibal”) underplays his role as a recently divorced teacher who having lost his job at a school for older children, now finds himself making do in early childhood education. Sure, he’s ruggedly handsomer than your typical guy next door, but Mikkelsen, who won best actor for this role at the Cannes Film Festival, disappears into this character. Lucas is an ordinary man, trying to keep contact with the teenage son now living with his mother, to start a new relationship, to find meaning in the routines of work and daily life.

As local hysteria builds, the rational Lucas becomes stymied by an unspeakable situation that he cannot solve through socially-acceptable means. And so his frustration fuels his anger, a powerful emotion he doesn’t know how to handle, because what use does a civilized man have for anger?

Vinterberg, who directed “A Celebration” and founded the Dogma collective with Lars von Trier, uses a sharp cinematic knife to cut to the core of the matter: that the human heart can never be entirely civilized and, ultimately, each man is alone with his fate.

Despite its topical theme, “The Hunt” couldn’t be more different from a “Lifetime” issue movie. Is there child abuse in the world? Yes. But is the interaction between Lucas and Klara child abuse? And when does the societal machine in place to protect the innocent become the instrument of persecution? Audiences will be unraveling these provocative questions long after they leave the theater.

Bottom Line: A Danish teacher learns a kiss is not just a kiss, and Mikkelsen merits an Oscar