]
Perhaps it’s unfair to critique a movie based on a Danish film that virtually nobody in America has seen, “A Hijacking,” so let’s just begin with this: I caught up with “Captain Phillips” yesterday at The Moviehouse in Millerton, NY, with my son. Its conventionality surprised me given that it was the opening night film for the prestigious New York Film Festival and Paul Greengrass (“The Bourne Ultimatum,” “United 93”) directed.

True, “Captain Phillips” succeeds as an edge-of-your seats thriller with Tom Hanks (or TOM HANKS) as the real-life Maersk Alabama captain Richard Phillips. The good Massachusetts-born merchant mariner survived the vicious 2009 attack by four seriously undernourished Somali pirates armed with automatic weapons en route to Mombassa, Kenya — aided in the end by a team of brick-built Navy SEALS who arrive like the cavalry to save the day.

So, is this “Zero Dark Thirty” off the Somali Coast? No, and that’s because, in the end, while the event itself plays out with horror and urgency, and an American everyman showed courage under fire, the point-of-view is so generic. So generic, in fact, that Oscar buzz for Hanks, with his studied if inconsistent Boston accent, seems misplaced, particularly in this competitive year with outstanding performances by Chiwetel Ejiofor (“12 Years a Slave”), Matthew McConaughey (“The Dallas Buyers Club”), Bruce Dern (“Nebraska”) and Robert Redford (“All is Lost”).

Although Hanks’ captain does sweat and grunt and speak into a walkie talkie, the performance seems of a piece with his role as Robert Langdon in the big-budget puzzler/adventure “The Da Vinci Code.” Yes, Hanks doesn’t change his underwear for the entire movie, removes his shirt (really?), gets splashed with blood — and pulls off one good weep. One could argue that his cry moment deserves a place at the Best Actor table but I would counter that, for actors, crying is easy, taking us deeper inside a character is difficult.

Still, Hanks serves more-than-adequately as the star engine powering this ship-at-risk story. However, the star’s super-appeal in the face of his adversary, the projectile-toothed pirate Muse (Barkhad Abdi), is a great big cotton-ball smothering the question: who is right, and who is wrong on the far side of the world. Both movies, “Captain Phillips” and its Danish little brother “A Hijacking” deliver a tense movie-going experience, although certainly in “Phillips” that is blunted by the knowledge that the captain survived to write a book and return to sea. (Amazingly, “Zero Dark Thirty” remained tense even though viewers knew the final act.)

What made “A Hijacking” so haunting was the ambiguous tensions beyond the incident between Europe and Africa, haves and have-nots. In that movie, the action shifts between deteriorating conditions on a hijacked Danish ship in the Indian Ocean held for ransom, and the ship owners’ sleek Copenhagen glass and steel corporate HQ. When the Somali pirates ask for $12 million ransom, back in Denmark,the arrogant CEO begins with a low ball offer of $250,000, initiating a bleak standoff where, ultimately, corporate greed holds both the seaborne captives and pirates hostage.

As I wrote earlier this year about the foreign film at Yahoo! Movies; “On one hand, this is a painstaking thriller about what happens when an act of piracy on a distant sea upsets the balance between East and West. On a larger level, as it shifts between the wealth evident in Denmark and the desperation reflected in the pirates’ behavior, “A Hijacking” raises the provocative question: Who is hijacking who?”

While “Captain Phillips,” to its credit, honors the pirates with more back-story, and they evolve as characters — the leader, the angry one, the boy pulled into the fray, the fourth man as ballast — the end still lands squarely in a Hollywood space. The Yanks win with the help of technology centuries beyond the Somali’s manufacture, and crush the outnumbered pirates to make the world safe for commerce. Hurray? 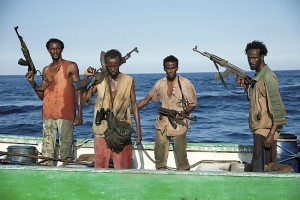