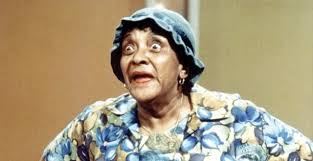 One of the many interesting discoveries in Whoopi Goldberg’s Moms Mabley biopic, “I’ve Got Somethin’ to Tell You,” which I saw at the Provincetown Town Hall with John Waters in the audience, was Eddie Murphy’s on-camera confession. He said that he fashioned his sassy black grandmother in “The Nutty Professor” on the legendary comedienne Jackie “Moms” Mabley. This admission inspires the question: did Tyler Perry pinch his Madea from Moms, too?

It’s not as much an issue of ownership as the fact that Jackie “Moms” Mabley (1897 – 1975) influenced multiple generations of comics – and has been nearly forgotten by contemporary audiences under forty. And it’s because of this cultural amnesia that Goldberg – and the doc form – deserves their props for reclaiming this once-famous, now nearly forgotten performer — a pioneer who never had any intention of being one.

The movie, which takes its title from Mabley’s 1963 album, one of twenty she produced, bursts with talking heads: Murphy, Harry Belafonte, Sidney Poitier, Joan Rivers, Kathy Griffin, Debbie Allen, Arsenio Hall, Quincy Jones and Goldberg herself. Before she became famous, Goldberg performed a Moms Mabley one-woman show in Berkeley – and she has the black-and-white stills to prove it.

Goldberg’s greatest assets as a documentarian are celebrity access and choice of a subject overripe for rediscovery. Mabley, dressed in a printed housedress, a clashing shirt, a toilet-paper cozy of a knit cap, patterned tights, and oversized shoes and, in later life, missing her top teeth, was the anti-mammy seen in Hollywood movies and TV. She spoke the truth behind the truth like the real mammies and maids must have done in their own kitchens like the working women in “The Help.”

Born in Brevard, North Carolina, as Loretter Aiken in 1897, the future Jackie “Moms” Mabley ran away from home and ultimately joined a Vaudeville duo called Butterbeans and Susie. She played the segregated Chitlin circuit and landed as a regular at the Apollo in Harlem doing five shows a day, six days a week. She shared billing with Duke Ellington and Cab Calloway and at one point in her career was making $10,000 per week.

Whether on stage or television, Mabley tended to tell stories with stealth punch-lines. With the growth of the Civil Rights Movement, she had crossover success with white audiences. Later in her career, she appeared on “The Merv Griffin Show” and told a story about being out and about and called the name of Roy Rogers’ horse. Trigger, A beat behind, Griffin blushed, belatedly understanding where he was being so smoothly led.

Sure there are faults to Goldberg’s directorial debut: the animated recreations of Mabley’s act are crude; the letters that appear on screen when all that was available is audio are annoying. But those are quibbles.

Bigger problems are that the film opens tantalizing pockets of biography that it fails to fully explore. For instance, offstage Moms dropped the housecoat, preferring menswear and squiring pretty girls on her arm. Of two rapes that occurred in her teens that resulted in children surrendered to adoption, there’s a mere mention. These seem like fertile veins for a documentary. While Goldberg deserves credit for raising them, a more experienced filmmaker might have mined them for more insight into the performer, an out lesbian before the term “out lesbian” existed.

But, the footage when Mabley sings “Abraham, Martin and John” at the Playboy Mansion in the 70’s to an audience that includes Sammy Davis Jr. and Hugh Hefner and an interracial circle of swingers is a jaw-dropping time capsule. Ditto her appearance on Ed Sullivan, who appears with muttonchops that do nothing to soften the stiffness of the man beneath, in contrast to Moms’ earthy wisdom. Another, when, in her late seventies, Mabley flirts with a young Kris Kristofferson on stage at an awards ceremony, and removes her false teeth to continue performing reveals a woman who by then was secure in her place in the world and wasn’t about to start bullshitting and back-pedaling for the cameras..

So props go to Goldberg for reclaiming Moms with a film that will be broadcast on HBO next fall, and reminding us that when we see Madea, or Murphy in Grandma drag, that these characters have roots in a performer who paid her dues by telling the truth to audiences that weren’t always prepared to hear it. Her message was simple though never easy: Speak out. Change will follow.