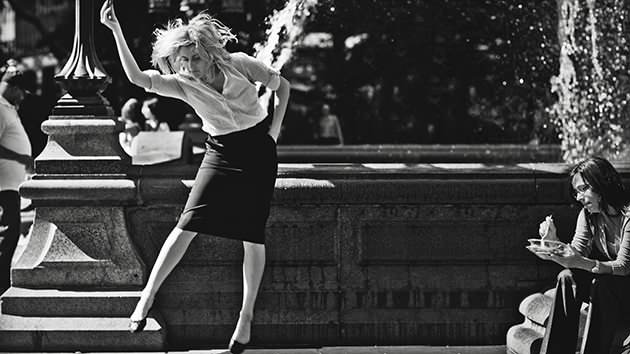 While bromances flourish – doctors, racecar drivers and superheroes bond regularly — memorable movies about best girlfriends are a rare species. But in that environment, “Frances Ha,” the brilliant black-and-white comic collaboration between star-writer Greta Gerwig (“To Rome with Love”) and writer-director Noah Baumbach (“Greenberg”), is a game-changer.

Best friends since college, happy-go-lucky Frances (Gerwig) and roommate Sophie (Mickey Sumner), now in their late twenties, share the same bed and the same inside jokes. Frances quips that they are like an old lesbian couple without the sex.

That’s about to shift.

When Sophie announces she’s moving out to bunk with her boyfriend, the news falls on Frances like a smack in the face. Alone and adrift, Frances gradually realizes that her dream to be a dancer may be fizzling, and that financial instability is only romantic for so long.

[Related: ‘To Rome With Love’ Star Greta Gerwig is Wild About Woody Allen]

Frances moves from sublet to sublet – all while playing out a girl has girl, girl loses girl, girl gets girl back platonic love story. As the drama unfolds the film creates a portrait of what it’s like to be on the wrong side of the old phrase “if you can make it here, you can make it anywhere.”

Frances (like Gerwig herself) joins the stream of provincial young women who move to Gotham to reinvent themselves. She follows in the footsteps of the Madonna of “Desperately Seeking Susan” vintage or Marilyn Monroe in “How to Marry a Millionaire.”

Bolstered by a shrewd script and a meticulous director, Sacramento-native Gerwig sparkles and shines. By turn screwball heroine and ungainly character player, she has emerged as her generation’s finest comic actress.

As Sophie, Sumner (the daughter of Sting and Trudie Styler) plays against type. The stylish, statuesque blond with a posh British accent disappears into a no-nonsense Yankee brunette with a realistic vision of her future — and Frances’s limited part in it.

Real-life bedmates Gerwig and Baumbach have forged a modern Woody Allen/ Diane Keaton partnership that elevates both their work. The actress’ writing, and her joyful turn as Frances, adds a welcome lightness that blunts Baumbach’s bitter edge without sacrificing his insight into contemporary life. Ha!

The Bottom Line: “Manhattan” as if “Annie Hall” was telling the story