Kirsten Dunst, like Drew Barrymore or Lindsay Lohan, is a blond that grew up in front of the camera – arguably the most gorgeous, and certainly the finest actress of the three. In Melancholia, she also becomes the most daring and memorable as Justine, a young bride whose anxiety spoils her lavish wedding but prepares her to cope with the impending world cataclysm. She embodies the relief that Chicken Little must have felt when the sky finally fell. Her crippling depression, in such contrast with her gorgeous shell, comes to represent the swirling contemporary societal anxieties in response to any number of external threats: economic collapse, religious fundamentalism, the energy crisis, super bugs, or global weather confusion.

As I wrote on my website, we first saw Dunst as a toddler in commercials, as an unsettling child undead in Interview with the Vampire, and then as the spunky damsel Mary Jane caught in the web of Spiderman. 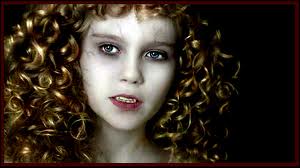 Child vamp: are those your baby fangs?

But, as the actress aged, despite the roles cast her way, there was a sneaking Garbo, a larger, more disturbing presence, the potential for a knock-down drag out fight between beauty and bitterness that Marie Antoinette suggested. It comes to full fruition in Melancholia, where even a girl with fairy-tale princess looks can never have a happily ever after.

As written and directed by Lars von Trier, and arguably a projection of his own struggles with clinical depression (the shingle is out), Dunst’s Alice in Apocalypseland starts off as a gorgeous canvas, a surface beauty. Her veneer is so vivid that it weighs on her – because she knows and is consumed by the darkness within. It’s the Marilyn Monroe tragedy, the moment when Garbo wants to be alone. 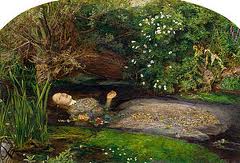 But Justine is not the mad victim heroine of Hamlet. She owns Melancholia; her character arc is central not tangential. As the movie unfurls, Justine is both the luminous sun at its center and its black hole, her personal melancholy bleeds into the new planet, unsubtly called Melancholia, which threatens to knock into earth like a cosmic croquet ball.

At the outset of the movie’s extended wedding sequence, Justine could have stepped out of an Estee Lauder Beautiful advertisement with her cumulus cloud strapless dress. She almost literally trails perfume, her make-up flawless, her skin without pores. She’s playful, loving, smart, and affectionate. She’s the bride as idealized object. 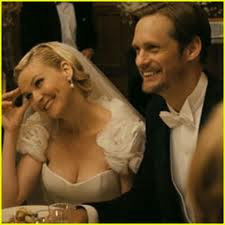 But, because it’s von Trier, that doesn’t last long.

As the endlessly over-structured ritual continues in a remote country estate, Justine’s eyes glaze over, her smile slips, her make-up fades, her coif comes undone, her dress tears. She takes a pee on the adjacent golf-course (an image that recalls Maya Rudolph’s Bridesmaids dump without the farce). She ruts with a guest other than her groom. Fearful, she desperately seeks solace from her parents, who give her none. She mercilessly rips her arrogant advertising executive boss a new one. Later, she even beats a stallion with a whip.

Cue part two. In the aftermath of the failed wedding, Justine collapses into depression on earth as the planet Melancholia appears ever bigger in the sky. The sheen of beauty dissipates. She struggles to leave her apartment, get into a cab and walk. Food tastes like ashes in her mouth. In one scene where her sister Claire (Charlotte Gainsbourg) tries to bathe her, she doesn’t even have the will to raise her own leg to climb into the tub. She is completely detached from her golden, glorious nudity.

The filmmaker has now shifted into a more despairing sense of realism. Von Trier rips the blinders off. This is what a seriously depressed person looks like when the inner darkness overwhelms the outer glow, and Dunst follows him all the way, shedding pretense and glamor like an unwanted wedding dress.

But von Trier takes Justine one more step on this journey. As the previously put-together Claire crumbles under the weight of her fear of death, her coping skills – let’s watch the end of the world with a glass of wine on the terrace – fall away. Meanwhile, Justine’s acute sense of the world rises.

Having been treated as a hysteric because of a personal sense of impending doom, the fatalistic Justine finds her center and her courage when doom is externalized. In what could be their final hours, she becomes the caretaker of her sister and nephew. And it’s this heroic transformation that takes Justine, the beautiful blond of advertising and romantic painters, and puts her into apocalyptic heroine territory. In the movie’s final moments, Justine sits cross-legged and back straight, and becomes an everywoman, the last sane human on the planet facing extinction. 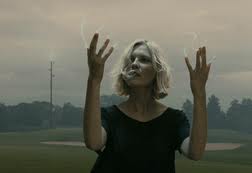 Is Justine happy? No. But she has the satisfaction of knowing she was right.

(Caryn James of James on ScreenS inspired this post during a discussion at the New York Film Critics series hosted by Mark Ehrenkranz in Morristown, NJ